This set ran by the San Antonio Spurs in the NBA Finals is packed with action. Utilizing the trailing post is the reverse man to swing the ball around the perimeter, they then run the strech 4 man off a flare screen while the 3 gets a shuffle screen from 5. This forces the back side to focus on their own man, the 5 man to protect the hoop on 3's shuffle. 5 then comes and ball screens the 1 man with the defense engaged else where. See More

Here is another late shot clock play that was run in Calipari's first year at Kentucky. This set is a good one to run if you have a point guard that can create off the dribble and a post that can dominate inside. Very quick and easy action. See More

Here is a play that John Calipari ran in his first year at Kentucky. This was a great set for that team because of where it placed their extremely talented players. You had 5 (Cousins) in the post, 1 (John Wall) attacking off the ball screen, and 2 (Eric Bledsoe) coming off of the stagger. They would run this at the end of the shot clock to get a good look. See More

Here is a traditional screen the screener quick hitter out of a box set to get an open 3pt shot for your shooting guard or a post feed. See More

The Indiana Pacers ran this set a few times in the ECF against the Miami Heat. They utilized mis-direction against an aggressive Heat defense to keep Miami on their toes. Following the UCLA screen and flex screen the 1 man then turns right back around to get the 3, letting #24 Paul George run off a stagger screen. This brought the 1 off a down screen and gave him the ball back in a better scoring area for him to create. See More

Took this from one of our conference opponents this past season. This play is best executed with a 5 that is a good passer. End result is a dunk or action for your best player coming off a ball screen. See More

This is the opening tip play that Team USA ran against Team World in the 2013 Nike Hoop Summit which took place at the Rose Garden in Portland, Oregon. This set is a simple set that will take minimal time to teach your players, and something that can steal you an easy two points to start the game and grab the momentum like Team USA did here. See More 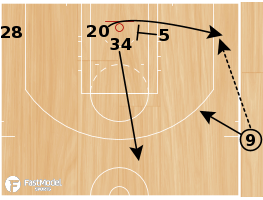 Here are some sideline out of bounds plays that the Celtics ran last season. See More

The Miami Heat ran this quick hitter set against the Indiana Pacers in Game 4 of the 2013 Eastern Conference Finals. See More 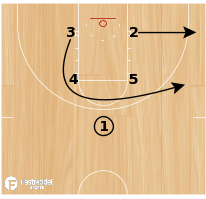 Here is a box set that gives you a an opportunity to take advantage of a mis-match by going to an ISO for 1 on the weak side attacking off the flat ball screen or to throw back to 3 for a three point shot. This is an effective quick hitter to take advantage of various matchups or to get a quality shot quick in an end of clock situation. See More