A historical performance on January 23rd 2015 by Klay Thompson and the Golden State Warriors. This is the play with which Klay Thompson raised up his points scored in the 3rd quarter to 35. Steve Kerr let the team run their bread and butter play. See More 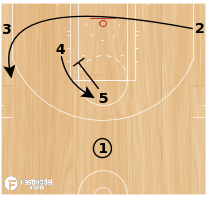 Can't use your personnel any better, than the New Orleans Pelicans did with this lob play! Anthony Davis and his 35 inch vertical does play a part. See More

This quick mis-direction action can give you several options for scoring quickly. If you have a good shooting point-guard, the early flare screen will provide him with an opportunity for a quick 3 in the possession. If the defense takes away the early 3-point attempt by your point-guard, the 3 man quickly sets a cross-screen for your 5 man, who should get a post-up opportunity on the block. The play finishes with a down-screen by the 4 man to give the 3 man an opportunity for a 3-point attempt after he cross-screens. See More 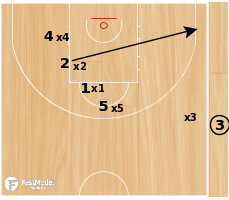 The Golden State Warriors ran this SLOB with 11 seconds to play (down by 4 points) in Game 7 of the first playoff round against the Clippers. A triple decoy play, which forces numerous switches. In this case the whole defense focused on Curry. He decided to take a 3 point runner, but could have passed the ball to Thompson for a wide open 3 point shot. See More

This BLOB set provides an opportunity to get your best shooter (2) an open 3-pointer on the perimeter. The early action and movement by 3 and 1 tries to get the defense more concerned about their movement and forget about 2. A great "counter" option for this set is to occasionally pass it to 3 as he makes his Iverson cut. He will have an open side of the floor to attack. See More 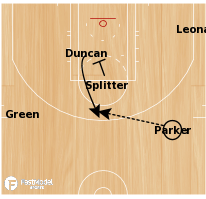 The Spurs ran this DHO action early and often in Game 4 of the 2014 Western Conference Finals vs. Oklahoma City (5-27-14). This particular set was ran at the 11:15 mark of the 1st quarter. See More 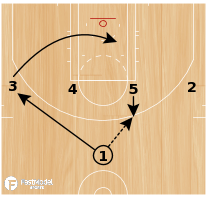 In Game 1 of the EC Finals the Pacers forced numerous post ups. Presumably due to the fact that the Heat helped one pass away and left Indiana's shooter wide open at the perimeter. See More 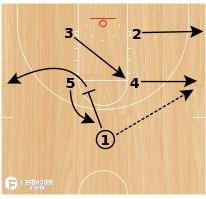 Posts start at elbows and ball is entered to 4 on right wing. This action sets up ball reversal 4-5-1 and shuffle cut by 4 to open lane. Secondary action includes 5-3 setting double down for 2 cutting high for a shot. See More 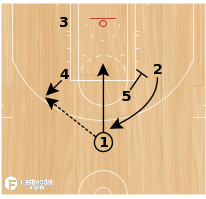 The Washington Wizards ran this play several times to post up Marcin Gortat during Game 5 of the EC Semi-Finals against the Pacers. The combination of a movement going to the ball (handoff) and going away from the ball (stack cross screen) makes it so effective. See More 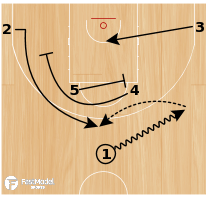 During the 2013/2014 Euroleague season, CSKA Moscow ran this high ball screen play with the special of setting a backscreen on the screener defender. This play is designed to have your two best pick and roll players running a high ball screen. The backscreen action workes against most pick and roll defenses (an exeption is the hard hedge and trap) and opens up multiple options for the offense. See More 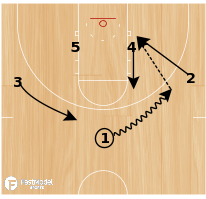 This is a play that was made popular by the University of Kansas that many teams have adopted for late-game situations. For more, check out the website www.coachpeelbasketball.com, sign up for a membership, and get your first 30 days free. See More 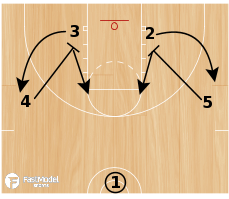 This is a great double pin-down ballscreen action. See More

Kevin Ollie may be a young Coach, but his tactical skills are outstanding. Bringing a wealth of experience with him from his playing days both at UCONN and in the NBA, the Huskies sets are well designed with lots of movement and screening actions. This 1-4 set play has three scoring options and is predicated on the ability of the players to "read" the defense. Kevin Ollie is buidling the Huskies back into a contender again after the masterful job Jim Calhoun did in his tenure at the Connecticut school. See More