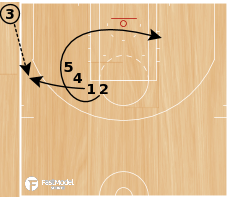 Inbounding the ball from the deep corner wasn't a handicap for Jason Kidds Bucks on January 4th 2015. They turned the inbounder spot into a useful advantage. With 9 seconds on the shot clock, Milwaukee was looking to get 3 point opportunity for Khris Middleton (40% career 3point shooter). See More

This 1-4 Low half court set was run by Baylor in a Big 12 matchup with Texas Tech. The action sets up a post entry or a 3 from the top of the key. See More

Kevin Ollie may be a young Coach, but his tactical skills are outstanding. Bringing a wealth of experience with him from his playing days both at UCONN and in the NBA, the Huskies sets are well designed with lots of movement and screening actions. This 1-4 set play has three scoring options and is predicated on the ability of the players to "read" the defense. Kevin Ollie is buidling the Huskies back into a contender again after the masterful job Jim Calhoun did in his tenure at the Connecticut school. See More

The Arizona Wildcats ran this play in their victory against the Oregon Ducks. Executing the DHO out of Transition, the Wildcats use good ball & player movement to create multiple scoring opportunities. The exchange at the end of the play between Johnson & Tarczewski is a credit to how well coached Sean Miller's team is, being able to quickly read the defense and take advantage of what is given. See More

Uni of New Haven MBB ran this single-double action against American International on 11-26-13. This set finishes with a flare aspect if the primary shooter is unavailable. See More

This play starts in high stacks and is initiated by 1 dribbling to right wing. 2-4 back screen with 2 catching on top. Weak side down 5-3 down screen to free 3. On 3's catch 4 cuts to high post and 5 seals defender in paint. An open shot for 4 is created or a post seal by 5. See More

This play creates an open three for a good shooting post player. The screen-the-screener action occupies 4's defender, allowing 2 to set a good screen on him to free 4. 4 must be ready to catch and shoot quickly. Secondary action is a quick 2-5 cross screen for a post feed. See More

A great entry used by the Miami Heat in the NBA Finals to get #6 Lebron James an elbow catch. The 2 man in this case played by #34 Ray Allen sprints right around the 3 man #3 Dwayne Wade and curls right into the lane for a short jumper. See More

Here is a set that Butler ran often for Gordon Hayward (3 in this set) to get him an ISO opportunity on his favorite side of the court. 2 cutting hard off of the stagger screen is essential so that x3 helps, giving 5 a great opportunity and angle to flare 3 out to the wing. Misdirection feel of this play by having all of the action go to the weak side up until the point of the flare from 5 also helps make this an effective set. See More