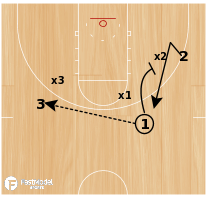 Screening Your Own Man vs Switching

Have switching defenses ever defeated you? The art of screening your own man to get a teammate open is rarely seen. But, it is a time tested strategy to counteract perimeter switching. Take a look at this simple 3 on 3 drill that teaches the screener how to adjust the screening angle to actually screen his own man. See More

Marc Gasol is one of the truly underappreciated players in the league. He's a solid post-up player, a decent shooter, the best big man passer in the league (with his brother being a close second) and he may very well be the defensive player of the year in the NBA right now. Memphis' offense is a cramped, inconsistent and often times ineffective collaboration of players who shrink the floor in an era that thrives on spacing it. When things go well for the Grizzlies, it almost always has something to do with Marc Gasol making a play for his teammates. Gasol is deadly from the elbows, as that position on the floor gives him a perfect vantage point of the floor and allows him to distribute from a high-low perspective. Here is one way the Grizz utilize Gasol's skillset from that particular spot on the floor. See More 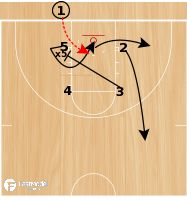 Set Play ran by the Kennesaw State Owls in their match-up against Mercer Kennesaw State shows a lot of patience on offense and does a good job running their sets A member of the Atlantic Sun Conference, they don't get a lot of attention, but Coach Preston's team is fun to watch See More

A nice set play ran by Bob Huggins after a timeout trying to isolate Kilicli in the post. Good movement in this set. See More 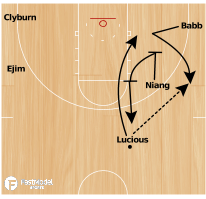 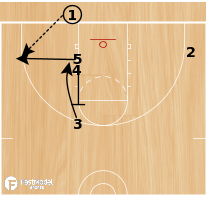 Valencia BC is a professional basketball club in Spain that plays in the ACB as well as the Eurocup. This is a baseline set utilized last season. See More

In a flashback to 2012 when Ohio State was in the Final Four, Thad Matta ran this set play after a timeout in their match-up against Wisconsin at the Kohl Center Ohio State entered the game undefeated and let a 17 pt lead disappear in the 2nd half as the Badgers got hot from outside This Buckeye team had two very good shooters in this year and Coach Matta did a very good job running sets to get his shooters in a position to do the most damage See More 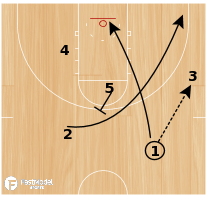 This multi-purpose play can help score points at different times during the game. It can be executed when you need a bucket, at the end of a quarter or half, out of a time out, as a quick hitting secondary play, or at the end of the game. You can move players around and feature any player as the go to guy in this play. See More