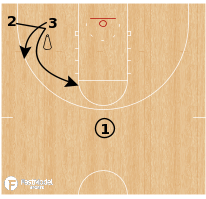 Down Screens with Guided Defender

Here is a drill to teach the reading aspect of using down screens. See More 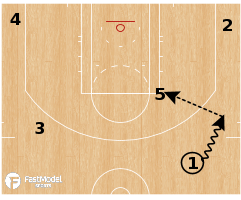 Here is another set off of San Antonio's high post offense. The ball gets to the high post and they run a down screen into a handoff at the elbow. The screener then fills behind the roll in a "chop action" cut. See More 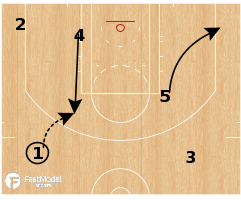 The Spurs ran this play against the Warriors working to get the ball to the high post and having the guards set multiple down screens for each other. See More

Sacramento State used this play in an upset win over Montana State in the Big Sky Tournament. See More 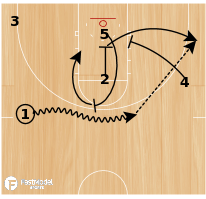 Michigan State ran this play a couple of times in overtime. The first time, the Spartans got an open 3-point shot in the corner. This is a very nice combination action. See More 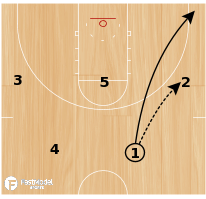 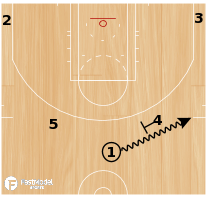 Horns offense. Option if #4 is a good off screen shooter. Great play for the begining of the game or quarter. See More 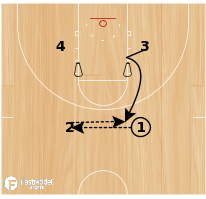 This is a shooting drill designed to improve shooing jump shots coming off of the down screen in the Flex offense. For more, check out the website www.coachpeelbasketball.com, sign up for a membership, and get your first 30 days free. See More

Pin Down with Cross Screen & Down Screen

This play is from the 2010-2011 Houston Rockets season. This play is best ran for a point guard who can shoot it, or for the purpose of the play have a player that can shoot it start the play. The key to this play is your point guard setting two great screens to force his defender to help which will get him open on the down screen. See More 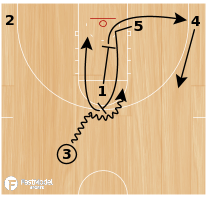 The Miami Heat ran this against the San Antonio Spurs in the NBA Finals to eliminate #21 Tim Duncan from hedging or trapping the ball screen. By having #6 Lebron James play the 3 he could handle the ball and free the 1 man #30 Norris Cole up to set a down screen for the 5 man #1 Chris Bosh. This is how #6 Lebron James got so many pull up jumpers as the Spurs post were slow getting up to the ball screen. See More

The Miami Heat ran this set in the ECF against the Indiana Pacers to get Dwayne Wade free on a ball screen. Chris "Birdman" Andersen ended up getting a lay-up as after he set the screen for Chris Bosh he rolled to the rim where Wade floated him a lob. See More 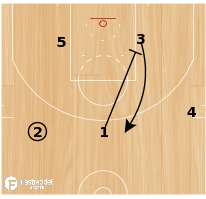 Knicks Pin Down Screen the Screener

1st quarter play ran by the Knicks in thier game 5 loss to Boston. Having Felton set a down screen on Melo should prevent a switch. Much of the Celtics defense is geared to stopping Melo, so having Melo facilitate puts even more pressure on Boston's defense. Chandler set a great screen and Felton curled it perfectly for the open jumper. See More 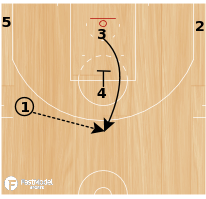 With under a minute left in the first half OKC ran this action to free up Westbrook. It involves a simple flare screen, but a Houston switch allowed a point guard to drive to the basketbal against a big for a layup. See More

A very simple Post Isolation into Cross Screen/Down Screen set play. A widely used action, but difficult to guard because it includes a pair of ball reversals, a couple of post isolations, and forces difficult decision-making by defenders who get caught up in quick screens. See More

For this set make your high post entry to your best passing big. Line up your biggest wing opposite corner of where the high post entry pass is going, so if the defense switches guard to guard screening action, you have a size mismatch. Make sure you sell to your point guards that setting a good cross screen will help get them an open shot off of 5's down screen. This play is from the 2012-2013 Wisconsin Green Bay season. See More