Here is a set that has been used effectively by Butler University over the past few seasons. The concept of this play is similar to Americas play, just in this set there is a stagger back screen set for the post as opposed to a simple cross lane screen. This has been a great set for Butler and hopefully you can find it to be effective as well! See More

A set Xavier ran late in the year for their best shooters. This is really effective because you have a lot of action and could have a couple of counters for it See More 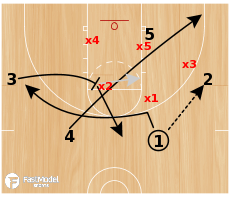 This is a Zone Offense action that we used last year with Fort Myers High School. When the play is run correctly it is very hard to guard every option. See More 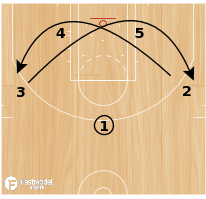 A quick hitting action vs a zone. See More 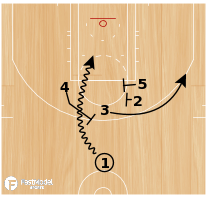 Oklahoma City ran this quick hitter vs Dallas in the Playoffs to get Russell Westbrook to the rim. See More 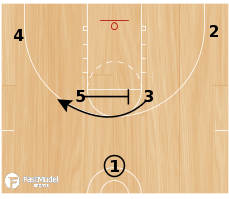 Olympiacos Piraeus is one of the top clubs in the Euroleague based in Greece. This is a PNR action they used last season during the 2012 Euroleague Final 4. See More 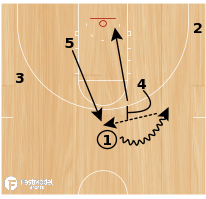 This is a set that is effective if you have one or two good interior post players. The initial High/Low action is good early offense that you may be able to take advantage of before you even get to the ballscreen-slip. Then you have the opportunity to hit your 5 man slipping to the rim or hitting your 4 man spacing on the perimeter. You will have opportunities for high percentage shots regardless of which movement you take advantage of. See More 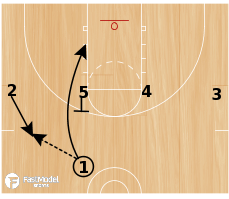 VEF Riga is a professional team from Latvia that also plays in the VTB United League. This is a set utilized to post up their point guard. See More 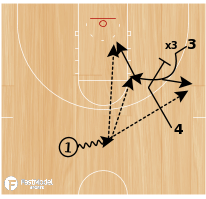 2 on 1 DOWNSCREEN - 4 sets a downscreen for 3 on x3 - 3 makes a read (Tight, Curl, Fade) depending on how x3 plays the screen - Screener always goes opposite the cutter - 1 man sweeps the ball below his knees, takes 1 dribble and delivers the ball to 3 2 on 1 FLARE SCREEN - Drill is repeated with a Flare Screen - 3 can fade, curl, or face cut to the basket 2 on 1 BACKSCREEN - Drill is repeated with a backscreen See More