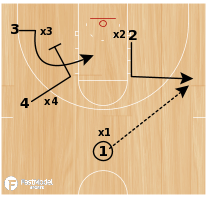 - Drill starts out with a big / little downscreen and an L cut on the opposite side - Once the ball is initially entered, there is NO DRIBBLE - Points are given for reversals, passes, and baskets - If the ball is dribbled it is a turnover (NOTE: You can also play this 5 on 5 and 3 on 3 and you can start with drill with a flare or backscreen) See More 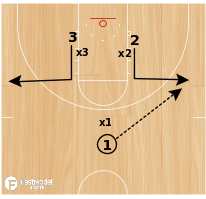 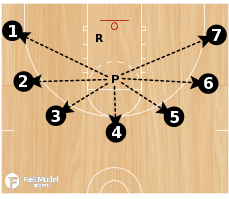 Use this simple shooting drill to foster competition among your players and work on shooting under pressure. See More

Use this 3-on-3 drill to keep the action moving and teach your offensive and defensive principles. See More

Pass down the line and cut to a transition spot. 5-on-5 Live Make or miss, transition to other end. 5-on-5 Live while team that was out goes 5-on-0. Important to get into 5-on-0 IMMEDIATELY. When 5-on-5 possession ends, coach yells "SCORE!" and the 5-on-0 team puts the ball in the basket and transitions to the other end. Continue and repeat. See More 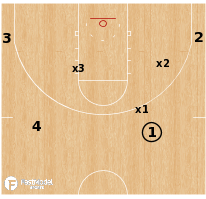 This is a drill that works on rotating, communication, and competitiveness. See More 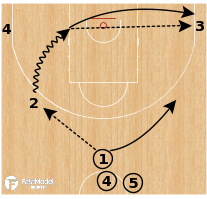 Team shooting drill 01. The drill can be performed at both half courts by dividing the team. 2 players at corners and 1 player at 45. The rest team at middle line with balls. The players at middle line pass the ball at 45 and go to opposite 45. The player at 45 will sweep attack the baseline and pass to opposite corner for a catch and shoot and replace. The player at corner shoots, gets own rebound and goes to middle line. The drill can be performed at a specific time or score to make it competitive. Check out the current deals on FastDraw below! See More 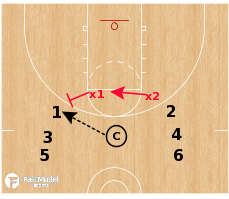 This competitive defensive drill focuses on closeouts, sprinting to help, and stunting at the ball. To add a communication component to it, require the defenders to say "I Got Ball" on the closeouts and "Help" when they are in help. The defense must defend and communicate four passes perfectly then they can play live 2v2. On the first two passes, the defenders sprint to help/closeout. On the third and fourth pass the defenders stunt at the ball as it is driven at them, then sprint to closeout/help. Use defense scoring in this drill. If the defense gets a stop they get a point and they stay on defense against the next team. If the defense doesn't communicate, sprint to help, close out correctly or they get scored on, they immediately lose and go to the end of the line and the offensive team goes to defense. On the FMS blog: Building Communication With Your Team Building Communication on Defense Building Communication on Offense See More

Here are 5 of my favorite shooting drills that I like to use in workouts with my players. They are challenging, competitive, and fun helping players become more efficient shooters. Try them out! Click here for more player development drills from Mike Shaughnessy Mike Shaughnessy x FastModel Sports - Twitter Takeover See More 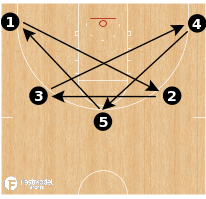 Make this shooting drill competitive by adding a timed element or a score element (or both). We will often do "Best out of 5." You could also do "Best out of 10" and have the player go through the 5 spots twice. The drill also serves as a great conditioning drill. It's best to use a rebounder. Click for more #PlayerDevelopmentWeek content! See More

Competitive drill to work on multiple skills or if you are limited with baskets and want to get shots up. Lanes can be adjusted based on your philosophy and number of players. Can add another lane to go 5 lanes wide. See More

A variation on the "Hunt the Paint" drill that encompasses transition principles, such as passing the ball ahead, changing momentum/direction on the catch, finishing against contact, rebounding, and pushing it off a rebound. Competitive way to start practice, get the juices flowing, and make SHOTS! See More

Thirty-Second Shooting is one of our favorite shooting drills. It can be done in less than five total minutes and makes for a very competitive platform. The shots are all game-like and the hardest working groups are justly rewarded. See More

This is the last drill we do as a team to work on our team slides and communication. Defense is obviously at a disadvantage so they must have tremendous bounce, effort, and communication. Drill is live and offense tries to score but penetration can only come from the 4 corners of the floor. Block players are stationary and the elbow offensive player goes elbow to elbow. This is a competitive drill and we keep score of both points and offensive rebounds. By putting the defense at a disadvantage by guarding 7 players, we feel guarding 5 will be much easier. See More