The Evansville Purple Aces play in the one of the most competitive Conferences in America the Missouri Valley Conference. Marty Simmons is the true greats in program history as a Purple Aces player and he now enters his 9th season at the helm of the program. In 2015, Simmons coached the Aces to a record of 24-12 and the CIT Championship. This Box Set has a little bit of everything in it and can be used to get a post-up for a strong 3 man, free up a shooter off the double stagger action, and also be used to get a FT line jumper or Hi / Lo. See More

Here is a competitive drill that incorporates five post moves for your post players. 1) Dive 2) up and under 3) short corner 4) leg whip seal 5) flash midrange jumper If post goes 5 for 5 we let him go again or inversely- post must go 3 for 5 to get out of this . This drill can be run on both right and left sides. See More

A competitive shooting drill that allows shooters to compete against each other and to work on FIVE game like 3-point shots: 1) catch and shoot, 2)show-n-go, 3 )transition, 4) floppy, and 5) L-cut movements. Drill emphasizes being "shot ready" and proper footwork (the hop vs. 1-2 step). It is essential to track shooters. Bonus: if a shooter goes 5 for 5 he can go again immediately. See More

This is a great play to run out of a time out, in transtion or as a quick hitter in the flow of the game. Designed mainly for a team with a strong pick and roll PG and an athletic 4 man. This play can be used to build some momentum in a competitive game. The first look is for 4 coming off the lob but it is important for 1 to attack off the ball screen and get in the lane. 5 will be sealing ball side block and 1 comes off the screen and should be looked at for a simple post feed. See More

1 On 1 I recommend starting this drill 1-on-1 first. Start with one rebounder (X1) with their head just in front of the rim and the first offensive rebounder at the elbow opposite the coach with the ball. Place the rest of the team in a line; they are all on offense. Once the coach shoots the ball, X1 must block out 1 and rebound the ball. The play is not over until X1 has secured the ball. The only way for X1 to get out of the drill is to make five consecutive stops (The offense cannot rebound the ball). The number is interchangeable but five is a good starting point. 2 On 2 War (2-on-2) really encourages a more competitive team atmosphere. Divide your players into two teams and put four minutes on the clock. One team will go to the baseline and the other team to the top of the key. Place a coach at the free-throw/1-point line area with a ball. The clocks starts once the coach shoots the ball. X1 and X2 are responsible for blocking out 1 and 2 respectively. If the defense rebounds the ball, they receive one point. If the offense rebounds the ball, the drill is not over; they must score in order to receive a point. At this point the drill is still not over, the offense should attempt to grab as many rebounds as possible and score as many points as possible. The drill is not over until the defense secures the basketball. Once the buzzer sounds and the current group finishes, keep the scores up on the board and flip offense to defense. Put another four minutes back up on the clock and start the drill again. Remember, the team now on offense was just on defense and vice versa, so make sure you are still giving points to the correct team. (i.e.: If at the end of the first four minutes the offensive team {Team A} scored 11 points, once they become the defense their first defensive rebound would get {Team A} 12 points and so on). If there is a high intensity level, keep the drill going and go through another session. Once you are satisfied with your team’s effort tally up the scores. Let the winning team grab water first while the losing team runs. See More

Play run by the French U19 women's team in the championship game vs. the United States. The game was competitive in the first half. This play has an Iverson cut, rip screen, and is tied up with a screen the screener. See More

Here is a really good competitive shooting drill that the University of Miami Hurricanes use under Coach Jim Larranaga and his coaching staff. See More

One of my favorite drills is The Inferno. This is a great October 15th drill because it immediately raises the intensity level or shows the lack of it. What you'll need: 3 Passers 4 Offensive players 4 Defensive players 1 Ball 1 Box of band-aids (if it's a successful drill.) Players begin on the elbows and blocks. This drill is for 8 minutes. The team's roles will switch at the 4 minute mark. There are no substitutions for the 8 involved. When the ball is at the top, the offense down screens. When the ball is on the wing, players screen across. To keep the drill competitive, and it won't take much, use one of the following scoring systems: Each catch = 5 defensive pushups (5 keeps the speed going plus a good screening group will average 20 catches in 4 minutes) Each catch = 1 pt for elbow catch, 2pts for catch on the block. Keep track and at the end of 8 minutes losing team has a reminder drill. Each catch = live four on four. Offense gets whatever shot they score, Defense gets 2 for a stop, 3 for a charge, etc.. 3fromthecorner.com See More 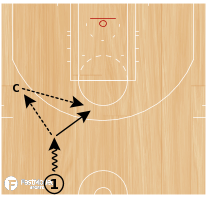 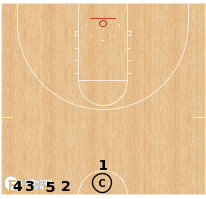 Chase and Shoot is a fun but tough shooting and conditioning drill that simulates game speed shooting from any spot on the court. Click for more #PlayerDevelopmentWeek content! See More