Another set started by a sprint screen from the Miami Heat as 1 sprints off 4's screen to set a ball screen on #6 Lebron James who is playing the 5 at this time. The 1 slips it and pops to the wing as #34 Ray Allen sprints off a stagger screen. #3 Dwayne Wade after setting the first screen opens right back up to the ball looking for a lob or pass. He gets a basket out of this in the NBA Finals. See More

One of the few plays not for #6 Lebron James that the Miami Heat utilized to get #1 Chris Bosh a post iso. Using him as a screener to free up #34 Ray Allen and then clearing #3 Dwayne Wade out as a decoy every single Miami player was outside the 3 point arc leaving the lob to #1 Bosh wide open. See More

The Orlando Magic ran this simultaneous pin down action yesterday out of the horns set. This is a very simple play to put into your system that gives you multiple scoring options. Options: 1. While 4 help defenders are occupied with the pindowns 1 has the option to take his man on the dribble to the rim or pull-up jumper. 2. Hit 2 or 3 on the pop or curl for a shot. 3. If 2 or 3 do not make a scoring play, have the big set a side or step-up pick & roll for them. 4. If X4 or X5 over help on the pin down, slip your bigs to the rim for a lob. 5. Have 2 and 3 come off the pindowns and set up in a horns set for pick & roll options for 1. See More

A slob to get your best 3 point shooter 2 chances at a 3. with the alignment and intial action you could put a lot of different counters off of this See More

The Miami Heat ran this set in the ECF against the Indiana Pacers to get Dwayne Wade free on a ball screen. Chris "Birdman" Andersen ended up getting a lay-up as after he set the screen for Chris Bosh he rolled to the rim where Wade floated him a lob. See More

Saw Detlef Schrempf demo this on Youtube. It's one of my favorite shooting drills near the basket because it requires good footwork. If a player knows how to position their body and use their feet to set up a drop step, hook, and up and under they should be able to score near the basket. After catching and drop stepping, player 1 continues curling around the cone and catching a pass. The next shot is a catch and shoot hook. The third shot is and up and under. The fourth shot is if a player is denied a pass in the post they spins away from the defense for the lob pass. After getting the footwork down without defense then dummy defense should be applied. The defense should over play to allow the offense player to get a feel for the reads. As an offensive players skill and comfort level increases with the dummy defense, then the defense should increase their intensity. See More

Florida Gulf Coast ran this tweaked double pick & roll action on Sunday night versus San Diego State in the Round of 32 NCAA Tournament. Be on alert for a Lob pass back to 5! See More

I have been waiting for two years to get a chance to check out Larry Shyatt's Wyoming Cowboys squad. Last night it took some searching on my cable box but I finally found their game versus the Lobos of New Mexico. The Cowboys fought hard all game to attempt an upset but the Lobos were just too much. New Mexico ran this nice half-court action very well to get an easy bucket down low with a throwback to 5. See More

An action I saw in film that I really liked. Although it is a common action in sets, I have not seen it a lot out of blobs. This is a great way to get an inside touch or a hi/lo against a team that fronts. See More

I saw the Indiana Hoosiers run this set versus Iowa in their first Big10 match-up. This is a great set to get an easy look. I added on the flare screen/lob option in case you want to run it more than once or give yourself another couple options. See More

This set has different layers to it so it could be different quick hitters. The first is a flex screen followed by a down screen. When the play is run all the way through you can get a double screen for a 3pt shot and also a lob off a back screen. See More

This is a fun set to install. The players will love it and you'll love the result. We use a pass I first saw late one night watching FIBA basketball on NBATV. Think Manu Ginobili type play. Your player passing will sprint to the baseline, jump out of bounds and complete a cross court pass. I like this pass because if the defense tips it you get to run a BLOB (see my other posts) and most defenders, mine included are going to stop at the baseline. If they don't, again, hit them and its a BLOB opportunity. Drill included See More 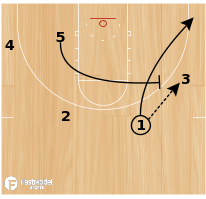 This is a great zone offense set play from Men's Basketball HoopScoop. Kentucky used this zone set play again Vanderbilt this past year in SEC play. It is a zone offensive set play that will allow you penetration off a ball screen, look at a roll off the ball screen, a lob entry, or an open three point attempt. See More

Today's FastDraw Play of the Day is a quick set from the UCONN Huskies for a LOB. See More